A friend of mine in Leisure Bay, Libby Goodall, yesterday sent me a short video of a shoal of ‘sardines’ floundering in shallow water at Pennington Beach on the KwaZulu-Natal South Coast. The video of the shivering/shimmering fish dragged my memory back almost 50 years to a similar sunny mid-June day in 1970.

A year earlier I had re-joined the Daily News staff after a post-graduate year studying in Boston. Previously working in management I was now in the newsroom. A friend phoned to tell me that masses of sardines had beached near Port Edward in the KZN Coast.

Although I was a rookie reporter, I instinctively knew that the landing of millions of sardines would make a good story (possibly even a page-one lead story). So I got more details from my friend, made a couple of phone calls to confirm the story and proceeded to write it up. As I finished the last ‘take’ I shouted ‘copy’ and a messenger took the story on its way.

A few minutes later I saw the News Editor, Chris Smith, walking towards my desk. I expected him to look pleased, smiling. In fact, he looked the opposite – displeased, angry even. As he reached my desk he said loudly “the sardines have not arrived. They NEVER arrive before July”.

I began to protest that my story was accurate, but he immediately interrupted, “Never! Got that? Never, ever!” He proceeded to tell me that he had ‘spiked’ (binned) my story. At which point he turned on his heels and returned to his cubicle.

Horses and nothing but horses

Some people make pacts with the devil. News Editor Chris Smith had made a pact with the horses. He loved horse racing and he was determined to promote the Durban July –

South Africa’s premier horse race – and nothing, not even millions of little fish on local beaches were going to interfere with his plans. The bloody fish could wait their turn!

According to the world according to Smith, and his well-laid plans, the “The July” (always held on the first Saturday of July) was to be given maximum publicity. The names of the horses and jockeys – even when one of them so much as coughed, – the betting, the pre-July fashion shows, the state of the track. Everything to do with the race and its aftermath.

Smith was a ‘hail fellow, well met’ type of guy, especially when in the ‘filler’ (the local pub frequented by journalists). He believed intensely in local news. To him, the perfect Daily News front page was one that featured only local stories. He disliked even national stories and loathed the idea of an international story defiling a front page.

Smith met his match in the editor of the morning newspaper the Natal Mercury – dour, determinedly uneducated, James McMillan – someone who prided himself on never having read a book and to have learned exclusively from ‘the university of life’.

Two other journalists of that time deserve mention. Firstly Pat O’Malley, the editor of the Daily News at that time. Quite shy, I think, he seemed to be a real gentleman and a deeply thoughtful man.

The other – a real character – was Ronnie Tungay, News Editor Smith’s predecessor. Looking back, I picture Ronnie as a man in perpetual, frantic motion. Hair, glasses, eyebrows, spittle and false teeth (almost) flying in all directions as he stormed about his job.

Journalism?  Not so fast!

I thought I would love journalism, but I did not. I loved news, but soon got bored with having to write stories about what mediocre people said, not because their thoughts were interesting or worthy of repetition, but because of the positions they held. People like Prof Owen Horwood and a variety of United Party MPs.

One example: I was asked to phone leading UP MP Mike Mitchell for comment on some or other story. He answered, I told him about the issue and asked for his comment. My request was followed by silence at the other end. I asked him if he was still there. “Yes,” he said impatiently, “but what do you want me to say?”

His question neatly captured the extent to which the English-language media and Natal (white) politics were intertwined and interbred at that time. In 1972 a position came up with the then Progressive Party – youth director in the Natal Coast Region. I was offered the post by Ray Swart and accepted. This led to my soon becoming regional director and having the opportunity to work with some super-bright young people like Tony Leon, Bobby Godsell and others.

P.S. The sardines are not sardines!

The sardines are actually pilchards, a different species. Small, but not as small as the ‘in a tin’ sardines. 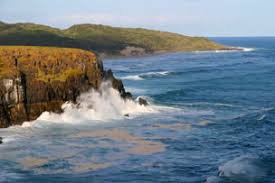 Their annual ‘run’ (migration) moves up the Eastern Cape’s Wild Coast and into KZN water at Port Edward. In a good season, large shoals make their way up the coast to about Durban. Countless millions of fish are involved.

The size of the run depends on weather conditions, water temperatures and other factors. Whether they ‘beach’ onto the seashore at various places along their route, seems to depend on wind direction, sea conditions (calm is desirable) and the pressure from predators which include large numbers of dolphins, game fish and thousands of dive-bombing gannets that savage the little fish throughout their journey (survival is based on sheer numbers). The fish have recently been placed on the Orange List.

The actual sardine ‘run’ is a hectic interface of shallow waves literally churning with small fish ( a bit like a washing machine in overdrive) and crazy humans who betray their savage predator/scavenger ancestral origins and go crazy with mindless greed trying to get their hands on as many fish as possible, Those who do manage to grab a lot are then faced with the task of cooking them. Fresh pilchards taste ok, but the fish ‘go off’ fast. In my opinion, they are smelly and make better bait than eating.

5 thoughts on ““The sardines have NOT arrived!””